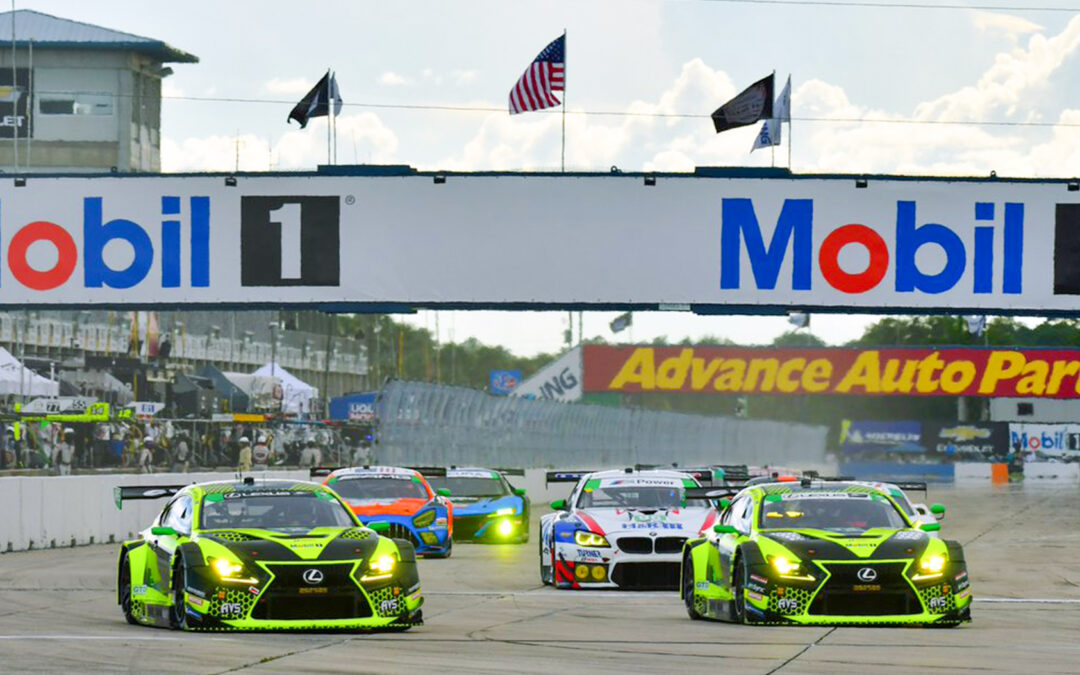 Plenty of excitement three hours into the Mobil 1 Twelve Hours of Sebring, with the second major incident of the day occurring with a four-car incident in the aftermath of Oliver Gavin’s blown engine shortly before the three-hour mark.

Gavin, running the final full-season race of his 18-year career with Corvette Racing, encountered problems in the No. 4 Corvette C8.R heading into the final turn, dumping fluid on the track. Seconds later, the two AIM Vasser Sullivan Lexus RC Fs of GTD class leader Townsend Bell (No. 12) and second-place Kyle Kirkwood (No. 14) spun out with heavy impacts into the Turn 17 barrier. Also spinning to a stop were Ryan Hardwick in the No. 16 Wright Motorsports Porsche 911 GT3 R and Rob Ferriol in the No. 30 Team Hardpoint Audi R8 LMS GT3.

“A total disaster for us,” Bell said. “It’s the worst feeling in the world. I was leading the race and getting settled into a pace, and then spinning into the wall with no warning.”

Ryan Briscoe and the No. 10 Konica Minolta Cadillac DPi-V.R was leading at the three-hour mark and is now in position to claim the DPi title. The team fought back after a penalty to co-driver and front-row starter Renger van der Zande making an illegal lane change at the start, resulting in a drive-through penalty.

“Obviously I got a penalty and we can’t change that, so we have to fight it forward,” said van der Zande. “The team did a great job, strategy wise. We want to be at the front at the four-hour mark — that will basically give us the championship for the Michelin Endurance Cup. We’re fighting for the championship, and we’d like to go out with a bang today.”

Wayne Taylor Racing’s penalty seemed minuscule 45 minutes later, when disaster struck the point leaders. Pole winner Ricky Taylor led the opening 45 minutes in the No. 7 Acura ARX-05. Following his first pit stop, Taylor lost boost and took the car to the garage to replace the intercooler on the left-side turbocharger. Entering the race with a two-point lead, the team’s championship hopes now ride on similar problems for its two rivals.

With its championship-leading teammates now 10 laps down, Dane Cameron and Juan Pablo Montoya picked up the torch for Team Penske, with Montoya running second at the three-hour mark in the No. 6 Acura.

Also in the championship hunt is the No. 31 Whelen Engineering Cadillac, with Pipo Derani nine points behind the leader. Co-driver Felipe Nasr was seventh after three hours.

“[Their problems] does not affect us at all,” Derani said. “We’re going to try to win this race, no matter who’s second or third. Unfortunately, with one of the guys fighting for the championship out, that makes things a little easier for us, but this is such a fantastic race that everyone is going to try to win, even those not fighting for the championship. It’s going to be a hard fight all the way to the end.”

GTLM has been dominated by the No. 25 BMW Team RLL BMW M8 GTE, of Connor De Phillippi and Colton Herta, and the No. 3 Corvette C8.R of Antonio Garcia and Jordan Taylor. At the three-hour mark, Earl Bamber led the class in the No. 911 Porsche 911 RSR-19.

The incident late in the third hour shook up the GTD standings. Darren Turner inherited the lead in the No. 23 Heart of Racing Aston Martin Vantage GT3, followed by Jeff Westphal in the No. 63 Scuderia Corsa WeatherTech Ferrari 488 GT3, and Lawson Aschenbach in the No. 74 Riley Motorsports Mercedes-AMG GT3.

Fourth — and entering the race leading the class — was the points-leading No. 86 Meyer Shank racing Acura NSX GT3.

Nine hours remain and still plenty can happen in the first November running of the 12 Hours of Sebring.