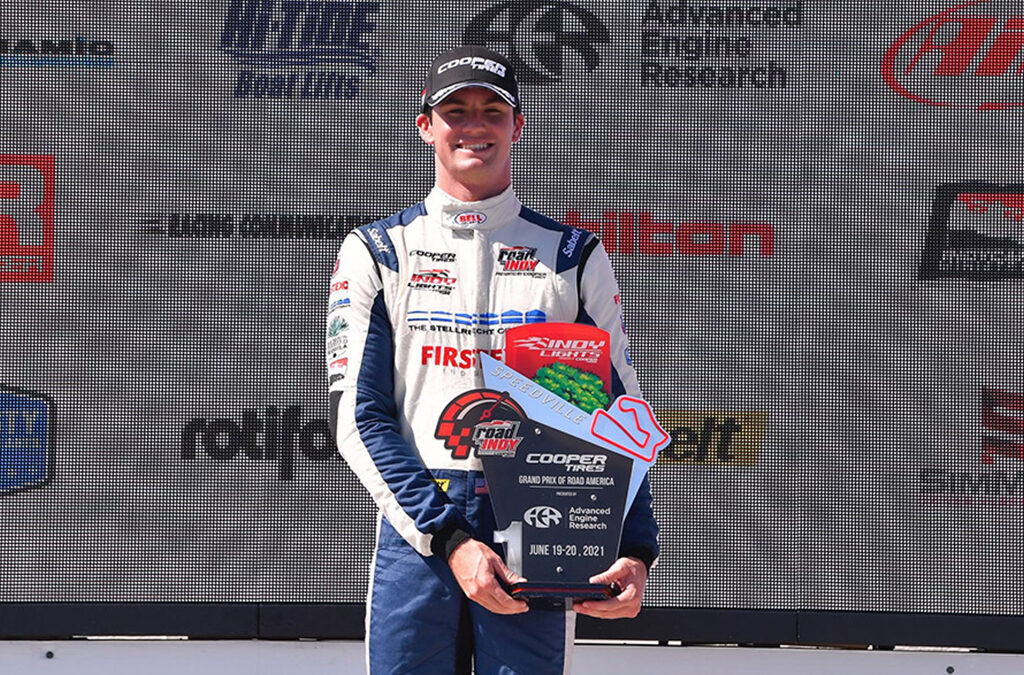 Kyle Kirkwood is on a roll. Just a few days after sweeping the Indy Lights Presented by Cooper Tires weekend at Detroit with a pair of accomplished victories, Kirkwood, from Jupiter, Fla., kept up the momentum by winning again this afternoon for Andretti Autosport. The rising open-wheel star has yet to be beaten at Road America, having swept the weekend en route to the Cooper Tires USF2000 Championship in 2018 and then added another double win while taking top honors in the 2019 Indy Pro 2000 Championship Presented by Cooper Tires. Perhaps even more remarkably, Kirkwood has achieved all five wins without once starting from the pole position.

Having gridded from the third position this afternoon, Kirkwood’s triumph in the first of two races which will comprise the Cooper Tires Grand Prix of Road America Powered by AER vaulted him from third to the championship lead after nine of 20 races. It also ensured that each of the three rungs on the Road to Indy driver development ladder now has a new points leader following an exciting day of competition on the 4.014-mile road course in rural Wisconsin.

“That first lap was hairy from the start,” said Kirkwood, driver of the No. 28 Andretti Autosport Dallara IL-15. “It was two-wide and I saw Malukas popped to the outside and Devlin went to follow him and I was next to Devlin and he ran into me. I backed out in case we had damage, then Linus and Toby both came flying through – it was kind of a nightmare. It’s the last thing you want to see happen in front of you when you’re in a championship fight. You just want a clean start, and that was the furthest from a clean start that I’ve seen. We settled into a groove, not using push-to-pass because we feel really strong on used tires. I had to use some pushes to get by Linus, but I was surprised that we were able to check out like that.

“The momentum is starting to show now, though it really did start at Detroit. We saved a set of tires, and we’re one of only four drivers starting on new tires so it’s going to be a game changer.”

“I was just so focused on taking it one lap at a time and keeping the tires going,” Pedersen said. “Tire management was huge, push-to-pass management was huge, making passes happen was huge – so in hindsight, everything was really well put together for us. The team gave me a fantastic car, everything just fell into my hands. Hats off to Linus, he kept it super clean – he could easily have pushed me wide. I took my opportunity when I had it and I look forward to battling him again.”

It was yet another Andretti Autosport charge, Singapore’s Danial Frost, who started from the pole position after recording his first Indy Lights Cooper Tires Pole Award during qualifying on Friday. Unfortunately, Frost’s fortunes changed just a few hundred yards after the start when he made contact with fellow front row starter David Malukas (HMD Motorsports), who was trying to execute an outside line pass in Turn 1.

Frost was forced to pit for repairs, while Malukas, from Chicago, Ill., also slipped to the back, effectively eliminating his hopes of overturning a one-point championship deficit to Lundqvist, who had started fifth.

Second-row qualifiers Devlin DeFrancesco (Andretti Steinbrenner Autosport), from Miami, Fla., and Kirkwood were both forced to take evasive action, which allowed Englishman Toby Sowery, who had lined up sixth on the grid for Juncos Racing, to nip through on the inside and assume the lead as the cars plunged downhill toward Turn 3.

Sowery led the first two laps before being overtaken by Lundqvist, who in turn soon came under attack from the recovering Kirkwood. Two laps later, Kirkwood made full use of his AER engine’s push-to-pass feature by powering past on the downhill run toward Turn 5 to assume a lead he never looked like losing.

The 25th win of Kirkwood’s stellar Road to Indy career was enough to break the previous record of 24 set by former Indy Pro 2000 and Indy Lights champion Spencer Pigot.

“It’s nice to have on the resume, that doesn’t hurt, but you always want more wins,” Kirkwood said. “We’re ahead of the game, since Spencer did it in five years and we’re only two-and-a-half in.”

Australian Alex Peroni took advantage of the first-corner shenanigans to vault from ninth to fourth. He then overhauled Lundqvist for second place before his Carlin Dallara’s gearbox began to fail and ultimately quit altogether.

Lundqvist thereby regained second, only to come under increasing pressure from both teammate Pedersen and Megennis, who had started eighth and lost two places on the opening lap before working his way back into contention. Pedersen finally ousted Lundqvist from second with an opportunistic move around the outside at Turn 5 with a lap and a half remaining to secure the Tilton Hard Charger Award after starting in 10th.

Megennis also had the bit firmly between his teeth, out-braking Lundqvist for third place also at Turn 5 on the final lap.

“That first lap was awful,” Megennis said. “I went off track, Sting Ray (Robb) pushed me off, I had contact with Christian. It was out of control; I don’t know how I didn’t have damage. After that, I had a great car underneath me and I kept putting laps down. I had no clue where I was at, I just kept passing everyone I came up to. I used my last push-to-pass to get around Linus – I knew that was my last chance and I had to go for it. The car was awesome; I’m so glad we tested here. It’s great to have some momentum and to feel quick, and to know we can come back and win tomorrow.”

Sowery slipped back to fifth at the finish ahead of Canadian Antonio Serravalle, who enjoyed his best result of the season for his family-run Pserra Racing/AS Promotions team by holding off a challenge from the recovering Malukas in the final stages.

Polesitter Frost’s disappointing afternoon ended with an unrepresentative 11th-place finish, although he will have another chance of glory after posting the fastest time during a separate qualifying session this morning. Frost will therefore start from pole position for the second race of the weekend which is scheduled to commence tomorrow at 8:50 a.m. CDT.