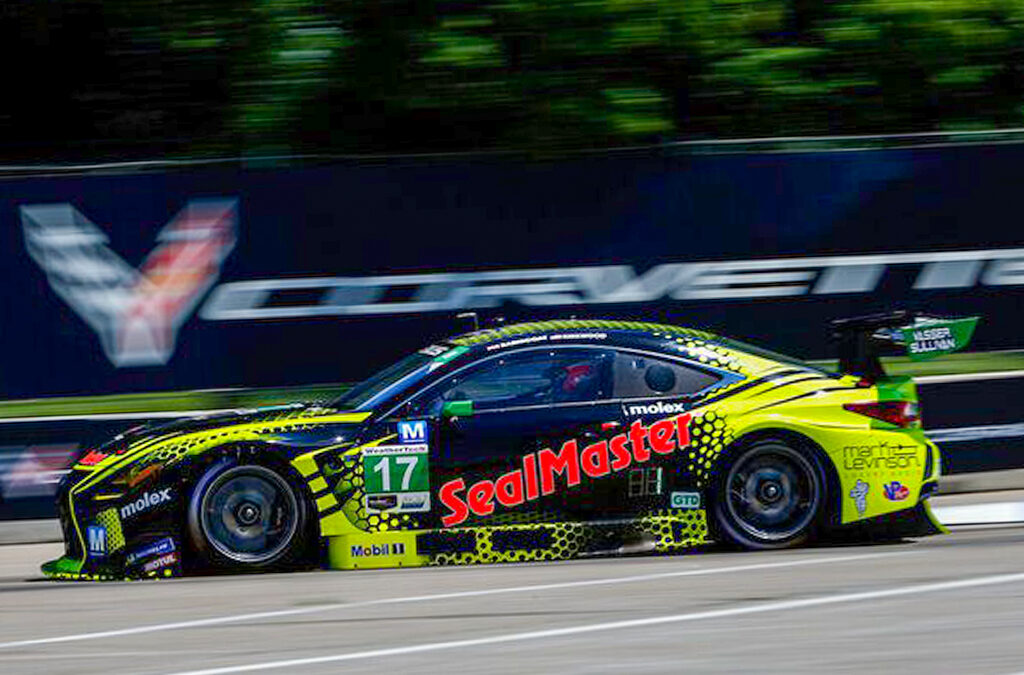 The 100-minute race started with Kirkwood on pole in the No. 17 Vasser Sullivan Racing Lexus RC F GT3 but the Florida native was overtaken at the start by Roman De Angelis in the No. 27 Heart of Racing Team Aston Martin Vantage GT3. Kirkwood stopped one lap later than De Angelis as each driver handed their cars off to their co-drivers. The Vasser Sullivan crew were faster on pit road by nearly 4.2 seconds and that was enough to give Kirkwood’s co-driver Ben Barnicoat a lead that he would not relinquish for the final hour of the race.

Barnicoat brought the car across the start/finish line 2.263 seconds in front of Ross Gunn with the No. 1 Paul Miller Racing BMW M4 GT3 of Madison Snow and Bryan Sellers finishing third.

For Kirkwood, this is his first professional race win after scoring dozens of wins in junior-level forms of open wheel racing. This win had a different feeling to all the rest that the 2021 Indy Lights champion has had so far.

“It’s with a team that we’ve been pushing so hard for a while now to get a win,” Kirkwood said in the post-race press conference. As everyone knows, the GTD field is absolutely stacked, especially for the pro drivers and I mean, it’s been phenomenal. This one really hits home with the team because this is my first win with them and I’ve been with them for a while now. We’ve had a lot of misfortune and this one feels good to at least break the ice and get our first win and I hope there’s going to be many more here in the short future.”

The Vasser Sullivan team installed Barnicoat as a substitute driver since one of Vasser Sullivan’s regular drivers Jack Hawksworth was out of the car with an injury. The Chesterfield, England native was in his second IMSA start after racing in the 2021 Petit Le Mans at Road Atlanta in a McLaren 720S GT3.

Kirkwood and Barnicoat’s win puts a close on sports car racing’s tenure at Belle Isle as the 2023 Detroit race weekend for IndyCar switches to a downtown street circuit that uses part of the old layout that hosted Formula 1 from 1982-1988 and CART from 1989-1991. The venue will host INDYCAR in 2023 but IMSA will confirm their 2023 event schedule in August at the annual ‘State of the Series’ address at the Road America race weekend.

Kirkwood’s weekend started off with setting the fastest time in Friday’s (June 3) sole practice session for IndyCar while setting pole position for the IMSA race. Saturday did not start off well for the 2020 Indy Pro 2000 champion as he had an incident with David Malukas in the opening minutes of the IndyCar session.

Going into IndyCar qualifying, Kirkwood was eighth fastest in the first group of round one, just over a tenth of a second slower than sixth-fastest Romain Grosjean who was the final car to advance to the second round.

Kirkwood’s performance puts him 15th on the grid for Sunday’s Chevrolet Detroit Grand Prix, which will air live on USA Network starting at 3:00 p.m ET with the green flag waving 30 minutes later.