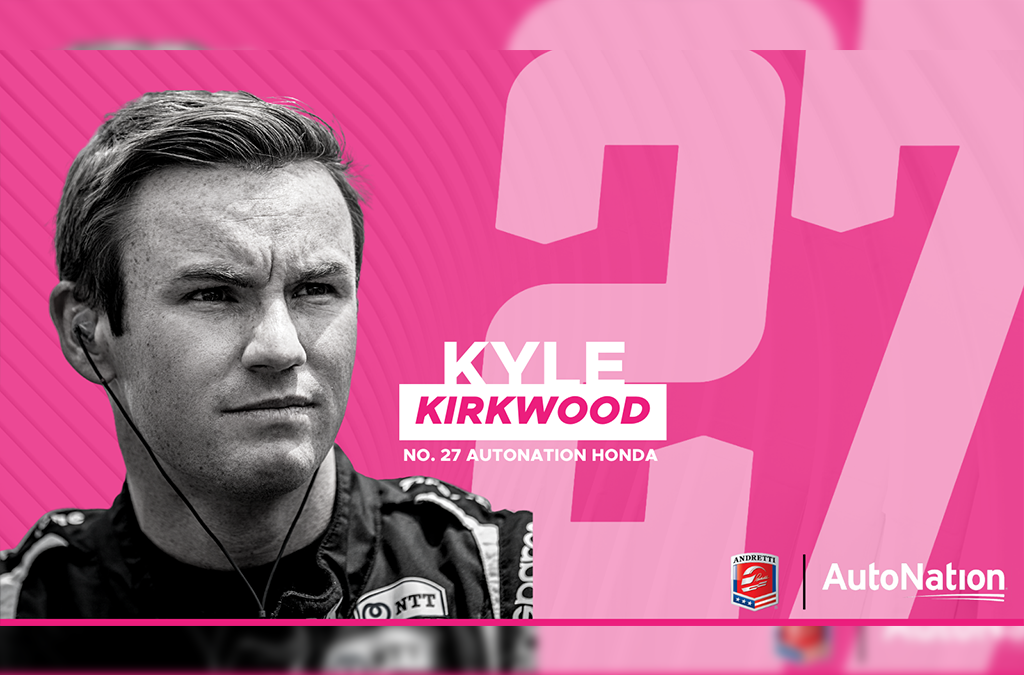 “I couldn’t be more excited to return to Andretti Autosport next year and represent AutoNation and Honda.” said Kirkwood. “Andretti Autosport is a place I’ve called home for years past and I have truly felt like family. I have a ton of loyalty to the team, and it means a lot to have Michael and the Andretti team offer me this opportunity. AutoNation has been doing great work in raising awareness and funding for cancer research. I’m honored to Drive Pink (DRVPNK) next season.”

Kirkwood continued, “I have worked extremely hard this season and will continue to work harder every day for the A.J. Foyt team. I want to thank the entire team at A.J. Foyt Racing for giving me the opportunity to compete in the NTT INDYCAR SERIES. The group on the No. 14 car have been incredible and I am beyond grateful to them for all the amazing experiences we have been able to share together so far this season.”

AutoNation, America’s largest and most admired automotive retailer, will serve as the primary sponsor for the full 2023 racing calendar as they drive towards $35 million donated in the fight against cancer. As a long-time partner with the championship-winning organization, AutoNation and DRVPNK have appeared on race cars across the Andretti Autosport INDYCAR team since 2014.

“We really enjoyed having Kyle as part of our Indy Lights team and he’s off to a strong start in INDYCAR,” said Andretti Autosport Chairman and CEO Michael Andretti. “I think he’ll bring a fresh perspective and will be competitive. We are looking forward to helping him continue his career growth.

“AutoNation first joined the team eight years ago and we’ve been thrilled to see how their support has continued to grow over the years. We’ve seen a lot of successes both on and off the track and are excited to see what Kyle and AutoNation can do together for the DRVPNK campaign.”

With this move, it is confirmed that Alexander Rossi will depart the team at the conclusion of the 2022 season after seven years. Together, Rossi and Andretti have captured seven wins, including the 100th Running of the Indianapolis 500 in Rossi’s rookie 2016 INDYCAR campaign.

“Alexander has been a great contender for us, and we’ve enjoyed having him as part of the team for seven seasons,” added Andretti. “He’s won races and become a leader in the team, but all careers and all teams evolve, and we’ve mutually decided it’s time for each of us to move on. I have no doubt he’ll have a continued, successful INDYCAR career and we wish him the best. In the meantime, we are all working hard to finish the 2022 season strong.”

Under the banners of Andretti Autosport and Avalanche Andretti Formula E, the Indianapolis-based team fields multiple entries across the INDYCAR SERIES, Indy Lights, the FIA Formula E World Championship and the IMSA Prototype Challenge LMP3 division. The team also competes as Walkinshaw Andretti United in the Australian Supercars category through partnership with Walkinshaw Racing and United Autosports. Additionally, the team fields an entry in the Extreme E championship via Andretti United Extreme E.

AutoNation, a provider of personalized transportation services, is driven by innovation and transformation. As one of America’s most admired companies, AutoNation delivers a peerless Customer experience recognized by data-driven consumer insight leaders, Reputation and J.D. Power. Through its bold leadership and brand affinity, the AutoNation Brand is synonymous with “DRVPNK” and “What Drives You, Drives Us.” AutoNation has a singular focus on personalized transportation services that are easy, transparent, and Customer-centric.