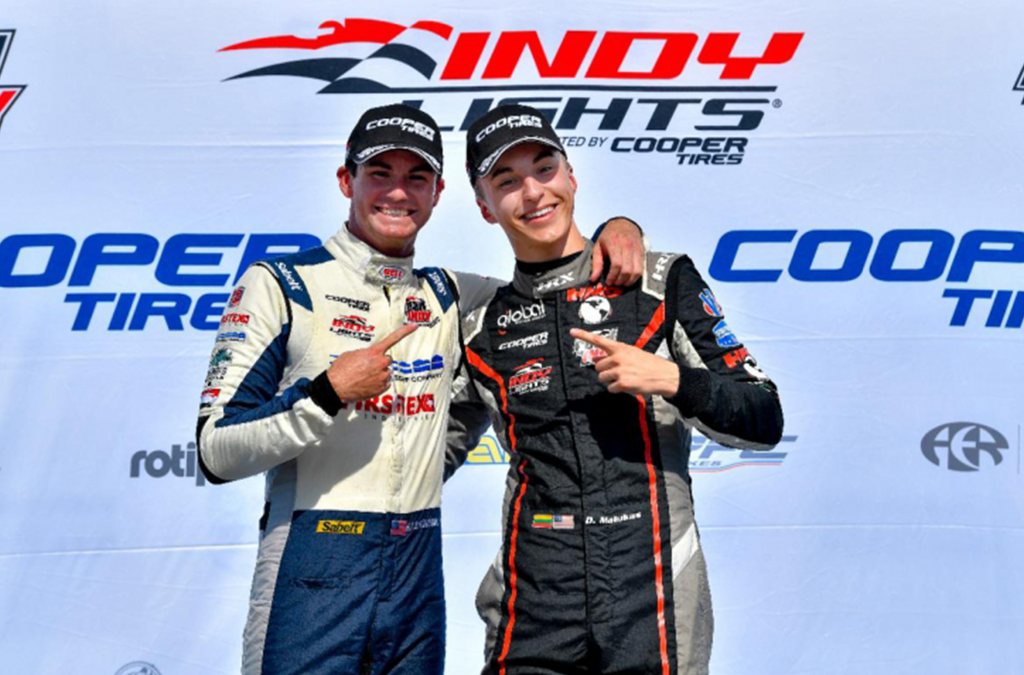 The ongoing battle for this year’s Indy Lights Presented by Cooper Tires championship crown – along with a scholarship valued at $1.3 million to ensure entry into a minimum of three NTT INDYCAR SERIES races in 2022, including the Indianapolis 500 – will continue this week with a pair of races at WeatherTech Raceway Laguna Seca, in Monterey, Calif. David Malukas, from Chicago, Ill., and fellow American Kyle Kirkwood, from Jupiter, Fla., remain locked in combat, separated by just a handful of points, 429-424, as they enter the final phase of the 20-race season which will wrap up at the Mid-Ohio Sports Car Course in Lexington, Ohio, on October 2-3.

This past weekend and a few hundred miles to the north at Portland International Raceway, in Portland, Ore., honors once again were shared by the two title protagonists. Each emerged victorious from one of the two 30-lap races, although HMD Motorsports’ Malukas managed to extend his slender advantage by a couple of points over his Andretti Autosport rival by virtue of claiming a pair of pole positions.

Malukas might hold a slight edge heading into this weekend’s Indy Lights Grand Prix of Monterey Presented by Cooper Tires, having previously raced an AER turbo-powered Dallara IL-15 at the challenging 2.238-mile during his rookie campaign in 2019. But Kirkwood knows how to win at WeatherTech Raceway, having clinched the Indy Pro 2000 Championship Presented by Cooper Tires with a victory that same weekend two years ago.

Several other drivers also have high expectations at the scenic venue nestled among the coastal hills overlooking the Monterey Bay. Swedish rookie Linus Lundqvist, who runs under the Global Racing Group with HMD Motorsports banner, still harbors an outside hope of claiming the championship following another pair of podium finishes last week to accompany his two wins earlier in the season. His teammate, Seattle, Wash.-based rookie Benjamin Pedersen finished fourth in both Portland races and is also the only driver to have completed all 558 laps that have comprised the first 16 races.

Kirkwood’s Andretti Autosport teammate, Robert Megennis, from New York, N.Y., hopes to build upon a podium finish on Indy Lights’ most recent visit to the California venue in 2019, while Rasmus Lindh returns after displaying impressive pace on his series debut at Portland with Juncos Hollinger Racing. Lindh, from Gothenburg, Sweden, has mixed memories of WeatherTech Raceway after sharing the Indy Pro 2000 spoils with Kirkwood in 2019 but losing out on the championship crown – and a scholarship to ensure graduation into Indy Lights – by a scant two points.

A compact schedule will begin on Friday, September 17, with 45 minutes of practice at 10:10 a.m. PDT, followed by the first of two 30-minute qualifying sessions at 1:30 p.m., which will set the starting order for Race One at 12:45 p.m. on Saturday. A second qualifying session at 9:45 a.m. on Saturday morning will determine the grid for Race Two at 10:15 a.m. on Sunday, immediately prior to the NTT INDYCAR SERIES headline event.

Comprehensive coverage can be found on Peacock Premium in the U.S., on REV TV in Canada, and internationally on The Race YouTube channel, the Road to Indy TV App and at RoadToIndy.TV and indylights.com.