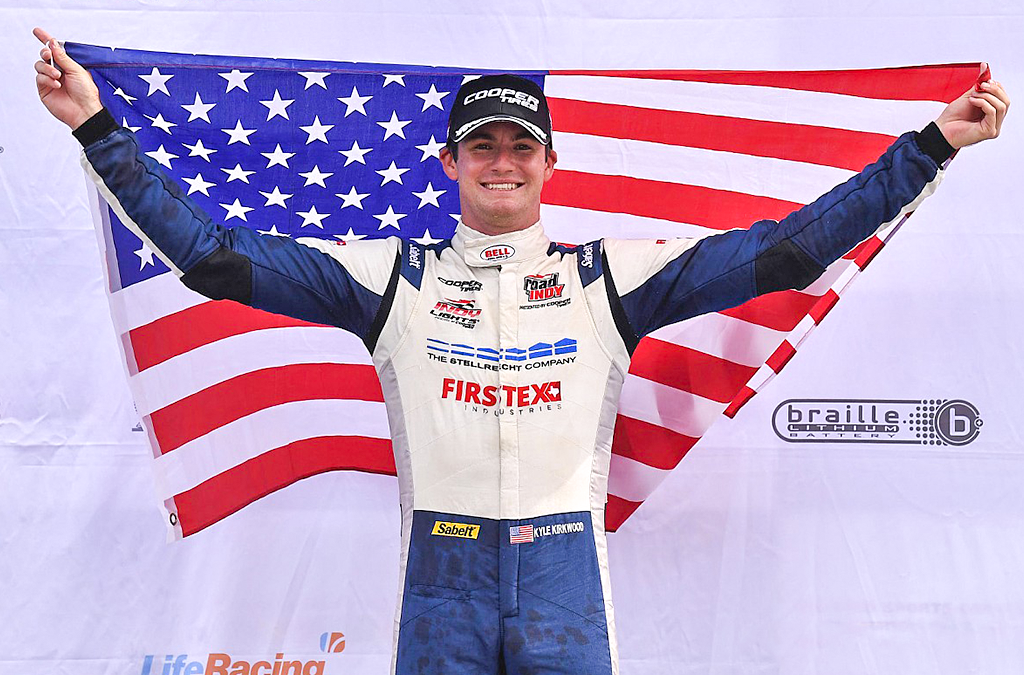 Andretti Autosport’s Kyle Kirkwood pulled off a stunning pass on Lap 2 to snatch the lead of the race and close the points margin on polesitter David Malukas.

HMD Motorsports’ polesitter David Malukas eased into the lead straight away at the drop of the green with teammate Linus Lundqvist taking second.

Behind them, Andretti Autosport’s Kyle Kirkwood beat the other Global Racing Group/HMD car of Benjamin Pedersen into the chicane to snatch third and then hung on to the tail of Lundqvist, who was the only driver on fresh tires and who was able to easily keep pace with Malukas around the 1.964-mile course on that opening lap.

Down the pitstraight to start Lap 2, Kirkwood looked like he might try and pass Lundqvist but instead it was the Swede who swung to the right to attempt a move on the leader. Malukas moved right to protect his line, Lundqvist stayed right, but locked his right-front into the braking zone and mounted the curb to avoid running into his teammate.

Both lost momentum through the chicane, and Kirkwood, who’d backed off to allow his rivals to compromise each other, simply took the conventional line and passed the pair of them exiting Turn 2 – a clear case of both wisdom and opportunism.

Malukas wasn’t going to let Kirkwood go, however, and initially had better pace. For the next three laps he was close enough to pressure Kirkwood into Turn 1, but the Andretti driver never felt threatened enough to move off line. By Lap 6, Kirkwood had pulled more than half a second clear, and Malukas was having to start checking his mirrors for not only Lundqvist but also Pedersen.

Already, this quartet had pulled a gap on three more Andretti cars – Robert Megennis, Devlin DeFrancesco (up from eighth) and Danial Frost. Yesterday’s Lights debutant Rasmus Lindh was given a drive-through penalty for running into the back of his Juncos Hollinger teammate Sting Ray Robb on the opening lap, bending its rear wing.

After a very hard scrap, Frost wrested sixth away from DeFrancesco on Lap 22, the same lap that their teammate Kirkwood pushed his lead over Malukas past the two-second barrier. Malukas had a similar margin over Lundqvist who in turn had a 2.5sec margin over Pedersen.

That’s how it played out to the flag, with Kirkwood scoring a superb seventh Lights victory to trim the championship lead of yesterday’s winner Malukas down to five points.