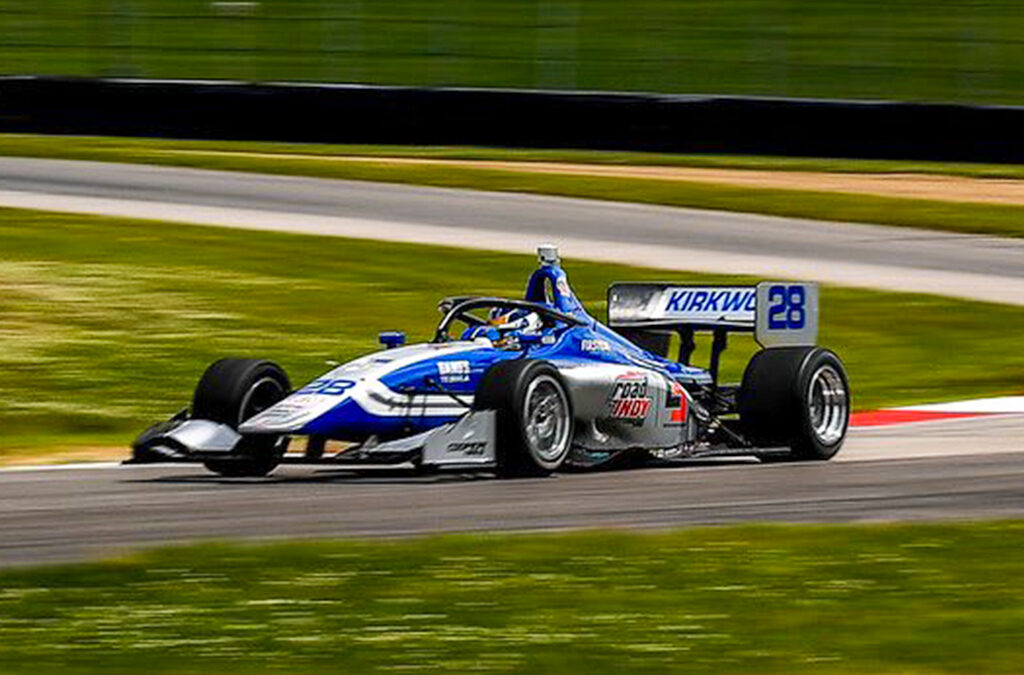 Andretti Autosport teammate Danial Frost once again followed Kirkwood home in second, after starting from pole position, while David Malukas minimized the damage to his Indy Lights Presented by Cooper Tires championship aspirations by finishing third. Malukas, who led the standings prior to the weekend, now trails Kirkwood by 11 points with eight races remaining in the season.

After claiming his third Cooper Tires Pole Award of the year during qualifying on Saturday morning, Frost clung onto a tenuous lead for the opening lap but was unable to prevent Kirkwood from taking advantage of his AER engine’s 50-horsepower push-to-pass feature on the back straightaway next time around. Kirkwood used the slingshot effect to move ahead comfortably before the braking zone for Turn Four, and even though Frost would enjoy the same power boost, he was unable to get close enough to return the favor.

It was the same story following a brief full-course caution after Carlin’s Christian Bogle slid off the road in Turn One. Kirkwood again was able to keep his No. 28 car tantalizingly out of Frost’s reach before edging away to score another clear victory, his sixth of the season and a record-extending 27th of his extraordinary Road to Indy Presented by Cooper Tires career in just 42 starts.

“I’m from Florida, but I really consider Mid-Ohio to be my home track – I enjoy driving here,” said Kirkwood. “There’s something about the high-speed corners and high grip – as opposed to most tracks, lap times go up as it gets warmer, not down. This is the track I have the most laps on and I’ve done really well here. But that said, everyone is talking about this ‘streak’ but I still have the same mentality that I’ve always had – that these streaks can come to an end at any time. Trends aren’t everything, but it’s going good right now.”

Frost seemed secure in second until the closing stages, when Malukas began to close in. Having overtaken Global Racing Group with HMD Motorsports stablemate Linus Lundqvist shortly after the restart, Malukas put his head down to close within striking range of Frost as the 35-lap race neared its conclusion but was never quite close enough to mount a serious challenge.

Lundqvist finished a relatively lonely, and disappointed, fourth, well clear of an entertaining battle between Italian-Canadian Devlin DeFrancesco and Toby Sowery. Englishman Sowery had earlier fought past Denmark’s Benjamin Pedersen following a protracted struggle, and looked set to displace DeFrancesco with five laps remaining. But DeFrancesco fought back, with the pair running side-by-side from Turn Four to Turn Eight before DeFrancesco was able – just – to maintain the status quo. Sowery had to be content with sixth.